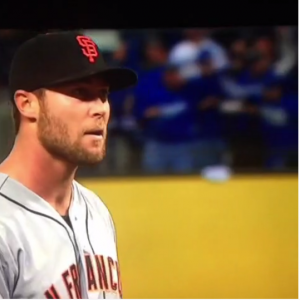 From the Looks of the Video, it appears Hunter Strickland Yelled: “Get in the dugout boy!”

If indeed he did call another grown man a boy I can see why the Royals’ bench cleared out, and none of the Giants left their respective bench.  They were not going to defend some racist pitcher from the backwoods of Thomaston, Georgia.

It is difficult to conceive; however, even in 2014, with Black people in the White House, there are places in the United States of America that Black folks dare not venture, places where the confederate flag unfurls.  Black folks better not say much or look white folks in the eye.  They’d better be on their best behavior, meaning they’d better step off of the sidewalk and permit white people the right to pass first.  No sane Black man will boldly go where no Black man has gone before.

Strickland claims he was upset because Salvador said something in Spanish to him he couldn’t understand. That is unlikely.  Moreover, that doesn’t mean he should call him boy.

Let’s face it Black men do not take too kindly to being ordered around, ordered to go into the dugout by opposing team members, or being called boys by White men. Being called a boy is synonymous to or like being called a “Nigger.”  This is what slave masters commonly called African slaves, even African slaves who were senior citizens.   It is what the so-called Knights of the Ku Klux Klan called Black men before they tortured or lynched them.

Regardless, it is not appropriate to refer to men as boys in a derogatory manner.

What is more disturbing is the way the media is trying to pretend it is unaware what Strickland said or that it is possible to determine what he said by reading his lips or magnifying the sound.

In this day and age, some people still prefer to cover up for white men and magnify mistakes by Black men.  After all “White Boys will be boys.”  When it comes to domestic violence, the media is having field day with domestic violence, as if white police officers do not have the highest incidence of domestic violence.  See Suing the Police in Federal Court, By Wayne Johnson.

It is not like white people do not have the worst record for violence against people of color in the the history of the entire world.  If it came down to it, I’d rather be slapped around than have an Atomic bomb leveled on me, or be forced into bondage or be deprived of my land and livelihood and be forced to be subservient to a group of foreigners in my own land.   Of course, I’d prefer none of the above.

I listened to this interview the other day on the Charlie Rose Program. He was interviewing a staunch Zionist who said he would not consider giving the Palestinians a state unless he see signs of real change. He said he would have to see educational reform. For him educational reform would be Palestinians changing their textbooks to remove all negative historical references to Jews.

I do not know if that is appropriate. However, I will not believe that white people are serious about ending racism unless and until I see educational reform on their parts. I will have to see things like White men ceasing to refer to Black men in derogatory fashion. More importantly, I will have to see men in the media ceasing to pretend they did not see or hear racist comments or actions when they are put out there for the world to see and hear.