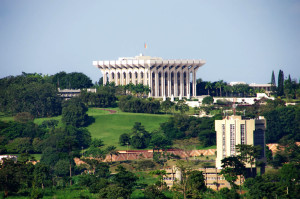 Two important edifices exist in Cameroon which define, to a great extent, the whole sociological architecture of the country – the cathedral and the presidency. The first is found at the center and like the force of gravity pulls all other things around it as a God and keeper of the nation. While the second, found about three miles away, constitutes the concentration of all the political forces that supposedly hold the nation together. But there are not two centers of gravity. In reality, despite the fact that the two operate in theory as separate entities, they constitute a continuum of harmonized inter-dependency linked together by a slippery tangent called control – or in its popular usage, power. 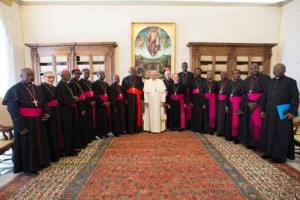 The cathedral, epicenter of the Catholic Church in Cameroon under the Archbishop on Yaounde, sets the tone for religious policy with regards to its relation to the State as well as the population. The presidency, on the other hand, is the heart of politics, residence of the president where he dictates the political climate. By understanding how both structures function, it is possible to know how the country operates. When Yaounde is breathing, Cameroon is alive remains a popular expression demonstrating the paramount role of the nation’s capital.

In the preamble of the Constitution of Cameroon 2008, it is specified that “the State shall be circular. The neutrality of the State in respect to all religions shall be guaranteed.” This proviso has become a characteristic of most modern States since their origin of 16th Century divorce from medieval monolithic religious societies, kingdoms and monarchies. With the exception of a few States which are defined essentially by religion [Vatican, Saudi Arabia and to some extent Israel], most modern States, in order to fulfil this post medieval ideal usually define themselves as secular, even when in practice things may not be as simple.

Islam and Christianity are the main monotheistic religions of Cameroon. Nominally, approximately 70% of Cameroonians are Christians, of which about 38% are Catholics, while about 20% are Muslims. Because the Catholic Church is the main centralized religious body in Cameroon, semantically and technically, it is the main body that appears to have some direct and continuous ties with government authorities, at all levels. It should be added that the president, Paul Barthelemy Biya Bi Mvondo, who has been in power for 33 years, is also a catholic. He had been in the Catholic seminary before being dismissed in the early years, of his studies. His father, Etienne Mvondo Assam, was a catechist by profession for the same institution.

Given that the president is a Catholic, it is easy for him to maintain close ties with the main centralized religious organ in Cameroon which would serve him both politically and religiously

The collegial complicity with leaders of religion enables him to exert institutional control over the people through indirect religious hypnosis thereby consolidating the authoritarian democracy. Or, should this be called an authoritarian dictatorship? In principle, the success of assembling, in a deconstructive way, judicial-legislative resources to conform to executive wishes may give the understanding that it is an authoritarian democracy. In practice, however, by taking into consideration that the president governs by decree and exerts tremendous control over all governmental institutions, the regime is more of an authoritarian dictatorship perhaps of a modern style.

As a result, we end up with just the belief that State and religion are separate as stipulated by the constitution. But in practice, they constitute a simple continuum of influence over the population where triggers can be generated either at political or religious levels to produce the same effect.

Divide and rule is a common strategy of control but in an authoritarian system unifying power structures can  be just as effective. But the worst part is when these structures don’t benefit the population they are constitutionally bound to serve. 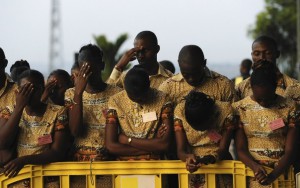 Three miles separate from the cathedral is the presidency in the metropolitan city of Yaounde. The cathedral where the archbishop presides his religious ceremonies is technically open but semantically closed. That is, it has just a few physical barriers to deter wanderers but everyone is welcome to enter and pray. One door of the cathedral is usually open, and in most hours of the morning and evening most of the doors are open for other religious services and those who wish to pray to their God: “let the children come to me, for unto these belong the kingdom of heaven” (Mat 19:14).

With a poverty level of almost 40% (2007), most of those who come to Church are around the poverty line. The Church welcomes them with phrases like “blessed are the poor…” and “it is more blessed to give than to receive.” (Acts 20:35). In practice, those who go to Church always hope to please God while thinking that their temporal situation will be made better here on earth. And rightfully so, they pray, offer tithes, and pay dues – which in the archdiocese of Yaoundé was recently increased in order to meet charges that were not properly defined.

Regrettably, a considerable amount of monetary contributions that are made to the Church do not serve the purpose for which it has given. In July 2013, amidst the greatest corruption scandal in recent Cameroon Church history, the Archbishop was forced by the Vatican to resign in the hope of restoring the hope of the people in its failing hierarchy.

In such a complex situation where Christians do not feel that the Church is advancing their welfare, most turn to the State for comfort. It should be mentioned that most of those who come to church have already been discouraged by the strong presidential regime and weak government.  Again, with another disappointment from the Church, they turn to the State and one of the closest structures is the presidency of the Republic.

However, access to the presidency is virtually impossible. Despite its closeness, it is heavily guarded by the GP (Guard Presidentielle) including a big fence. In this case, it is technically closed but semantically open. That is, in theory, the public is made to believe that the authorities of the nation are there for the public, to listen to them and to address their difficulties. But this is far from reality. The president is almost absent from all national life, with only sporadic appearances on national Television to read a speech to a public he doesn’t know. There is a real disconnection between the people and its authorities.

As a result, the little distance which separates the presidency and the Cathedral appears, evidently, to be the nature of what separates the Cameroonian populace from the power structures which need to promote their welfare. Consequently, like rebounds of a non-reward psychological mechanism, the people turn back unto themselves, frustrated, without trust in themselves, nor in the church or in the government. This is evident by the life of duplicity in which most people become attuned: going to church without any intention to be a better person or living in a nation without a desire to serve it honestly. Corruption, as an endemic crisis in Cameroon can be deduced from the mechanism of suspended misery: neither in “God” [Church] nor in the government do they find solace [position 136 on 174 countries, with a score of 27 on 100]. This gets even deeper – citizens grow to lose trust in one another thereby threatening social cohesion and growth. All these are visible in the lane separating the cathedral from the presidency. Despite the fact that both poles concentrate wealth and comfort, this lane is full of jobless people who wander along the streets; others standing on the road side with their tools while hoping to get hired by someone to do a temporary job or those illegally subcontracting government services to citizens who duly deserve them. It is also a lane of insecurity, vulnerability and despair – just the symbol of the country as a whole.

The perpetual rule of the centralized government of Cameroon which is the cause of this social disequilibrium has created another system which has not been sufficiently explored. It is the fact that political power governs with religious authority while religious power rules with political power. It is a strange power structure not before seen in many countries and where the citizens end up – as always – in suspended misery.

At the heart of social despair is an economic problem rooted in misappropriation of roles both in the religious milieu as well as in the political sector. The classical roles generally attributed to the State do not necessarily hold true for the State of Cameroon nor  for the Church. Below is a table which summarizes how the State governs with religious principles while the Church has been ruling using political strategy.

As illustrated in the above, the population has been made to accept inadmissible political practices where the executive leader is vested with an unlimited mandate for the presidency. Like a pontiff, he rules unilaterally over all other institutions which he has crafted to conform to his personal standards. This happens in a context where the archbishop resigned due to accusations of mismanagement of funds or the case of Pope Benedict XVI who resigned from an office which is supposedly made to be held for life. It is not uncommon to find corrupt leaders who get promoted and get rewarded with better appointments in the Biya regime.

Can this scenario explain the social and economic inertia of the country? Certainly, to a great extent. When political mobility is uncertain and religious credibility overthrown, it follows that the economic fluidity experienced by the public under the State of law would be jeopardized and at worst remain in misery.

Unlocking the infinite potentials of a nation cannot be done in a locked governmental system. A system that knows no variability. Neither can it grow in a religious context that has learned to survive with ruse, using political strategies while relegating religious protocols strictly to altar services. If change is the essence of society, then the government is criminal while the Church is complicit in its practice as they exploit a population that is ignorant of its own misery.