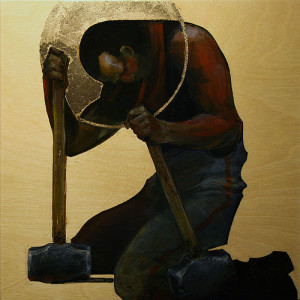 There is a moral to the folk ballad of John Henry which all African Americans and indeed all Americans should comprehend. A book written and published by Sidney M. Wilhelm in 1971 entitled: ‘Who Needs the Negro?’ will facilitate your understanding of the moral behind the ballad of John Henry.

Wilhelm’s basic thesis is that: “Negroes may enjoy equality insofar as they are first made economically irrelevant.”[1] African Americans finally achieved political equality under the law but at the same time for the past 50 years have not been cognizant of the fast pace of technological change taking place in the United States.  But this lack of  understanding is not surprising for some since most African Americans are not educated and do not have leadership at the local or national level to warn them of what is coming in the future.

What Wilhelm observed is that most African Americans came out of a work tradition of manual labor which required no technical training or expertise.  Three economic epochs define the economic necessity for ‘negro’ labor in the United States. All but one occurred in the 20th century. It is an ongoing tragedy of separation.

Both the context and infrastructure of production began to change for African Americans when after 1945, the mechanical cotton picker and then later the mechanical tobacco harvester were applied to agricultural production in 1965. One of either of those machines could do the work of a 1000 workers in a day. The introduction of farm automation ended the need for manual farm labor in the south. Two things resulted from farm automation. One reality was that African Americans were no longer needed for manual labor in the South.  And two, automation caused the acceleration of a mass migration by African Americans out of a rural context into a city context. For a while the new city context for African Americans gave them respite, but not for long. The infrastructure of production was changing rapidly.

Wilhelm observed that as the urban African American population grew by 86% between 1954 and 1966 that parallel to that population growth there was a 50% growth of industrial and mercantile construction outside the core city. The unskilled jobs were taken out of the urban center where African Americans lived. This shift was a national phenomenon. For example it happened in Oakland California. Between 1950 and 1960, 100,000 Whites moved out of Oakland to surrounding suburbs. By the late 1970s manufacturing companies were also moving out of Oakland. It was by design. Not only was there an increase in industrial production outside of city centers but there was also an increase in automation in factories.

This brings another problem to the forefront. That problem is the lack of education and more specifically the training of African American youth into the vocations and sciences. The controversy begins at the turn of the 20th century. Then only one man argued that African American youth should be trained to master the trades and vocations. That man was Booker T. Washington.[2] He established the Tuskegee Normal and Industrial Institute in Alabama. But his idea was opposed by those who argued for liberal arts educational opportunities particularly for children of the talented 10th elite of which W.E.B. Dubois was a member.

Booker T. Washington’s idea was also opposed by those who argued for entrepreneurial and Black Nationalists’ agendas. Those two agendas were most aggressively pushed by Marcus Garvey.  Though there is some merit in both Dubois’ and Garvey’s strategies both Dubois’ and Garvey’s proposals, now tried and tested over 100 years, have been proven to be defective means for the social and economic improvement of African Americans.[3]

Wilhelm wrote in his book that just when the civil rights laws were enacted by Congress or by a Supreme Court Ruling to insure equal access to public schools and universities the standard for entry into those schools was elevated. For example, prior to 1968 there was no SAT test requirement for application to a University of California. Grade point average was the major criterion. The pattern is clear.  Just as the first wave of baby boomers started graduating from high schools in the mid and late 1960s the SAT test was introduced to eliminate minorities.  That was by design. That same method is now being proposed in 2013-14 to make the GED (General Education Test) test more difficult; that will affect ethnic minority chances to overcome failed high school experiences. More African Americans will fail to pass the test because of the pervasive weakness in mathematics among minorities.

There is yet another problem. It is the problem of leadership or the lack thereof.  Today, civil rights law is not the central issue facing African Americans.  The problem is automation and the inability of millions of African Americans to retool their skills to compete within the post-industrial context. Liberal democrats will not speak in public of the issue while racist extremists and right wing republicans along with Tea Party advocates are pushing aggressively for privatization of Government. People they put before the public are silent on this issue, too. Those misleading public figures make the old argument for civil rights at a time when the law supports civil rights. But anyone who studies U.S. Labor Department Statistics will see the real issue of the day. They will see that there are 73 million unskilled workers in the job market. Of that number 4.5 million are African American. African Americans have the lowest paying jobs and belong to the most unstable families than any other group in the United States. Wilhelm states that African Americans are those who are increasingly ‘unnecessary’ in post-industrial America.

What Wilhelm did not see is that a last ditch effort would be made to make the ‘Negro’ economically necessary. First, the unskilled would find a new role as inmates in the prison industrial complex but not to work rather for government to justify increased taxation on citizens to support inmates who sit idle in prison and jail custody and to generate profit for corporate prison enterprises such as ‘Corrections Corporation of America’. Secondly, yet another way to make the Negro economically necessary was not foreseen by Wilhelm. This form of exploitation attaches to AFDC and Welfare income recipients to support small ghetto businesses which depend upon government entitlement money to survive. Here, too, as in the prison industrial complex there is no need for African Americans to be skilled or educated or to do any work at all. Just spend money. Both ghetto businesses and companies like ‘Corrections Corporation of America’ will fight tooth and nail to make the Negro economically necessary for their kinds of businesses. But they have one insurmountable problem and that is the demographic decline of African Americans over the next 46 years. Consequently, the general thesis of Wilhelm remains a cogent one.

Robotic technology is increasing at an accelerating pace. Factories and warehouses are employing robots run by computers to do the work that hundreds once did on a single shift. The cost for using robotic technology is cheaper than the cost for human labor.[4] The cost is even cheaper than what is paid to overseas workers. So, though we may see manufacturing return to the United States it will not be to hire unskilled Americans.

Unskilled African American workers are in the category of unnecessary. A humungous 72% of all African Americans with college degrees work for some form of Government. They too will be made ‘unnecessary’ because another post-industrial likelihood is the privatization of Governments at all levels. Look at Detroit as a model of a totally financially broke and dysfunctional Government.  Detroit will not be resurrected to it former form. Much of it will be privatized.

The United States Post office is another example of the privatization of Government movement. Already, as it stands it is partly privatized. In the years to come, it too will no doubt be completely privatized. Most State and City Governments are teetering on the edge of financial collapse and will seek alternative ways to govern and decrease expenditures due to shrinking tax revenue. Many of them will privatize departments and African Americans though educated will become ‘unnecessary’.  When Army and Naval military bases and hospitals closed in Oakland and Alameda, California during the 1980s and 90s that is exactly what happened. Thousands of African Americans lost their jobs. They too were unskilled for the post-industrial infrastructural changes.

Sidney Wilhelm ends his book with a very existential prediction. He states: “Under the economy of past technological configurations, it was incumbent upon White America to balance racial values against economic incentives. But with the introduction of automation, the necessity virtually disappears, since it is economically feasible to negate the traditional rational for the Negro’s existence. …the affected Negroes will not be so much abused as ignored. There will be no necessity to maintain measures of intimidation for purposes of economic returns as the Negro shifts from the economics of exploitation to the economics of uselessness.”[5] Later he states: “It is the double curse flung upon the Negro by White America to judge competency against the performance of a machine and the person by the color of their skin.” [6]

John Henry was a steel driv’en man. But John Henry died. His heart just popped wide open. His heart could not take the strain from competing with machines and he could not imagine, manufacture, and produce machines himself. John Henry did not have the foresight to see the age of automation.

[3] The FBI undermined Marcus Garvey but realistically, it is very doubtful that it would have worked for the masses. For example, Liberia was purchased by President Madison in 1822. It was headed by ex-slaves and Free Blacks. But it became a plantation for American companies like Firestone, Inc. and the Liberian leaders were nothing but brutal dictators over African people.