The administrator sent me an NPR article “How Would You Kill the “N-Word.”  I have no problem saying the word, “Nigger.”  It has no modern day relevance to me, or anyone I know or associate with.

Other so-called White people referred to dark Jews, dark Italians, and many of the darker Europeans of Greece, France, Spain, and the “Slavic” region as Niggers.  The infamous Captain James Cook supposedly once said “they maybe be [Polynesians], but they look like Niggers to me.” Today, those in the United States military refer to people in the Middle East as “Sand Niggers.”

The word was not originally derogatory anyway.  It is a variation of the Latin, Niger, or the Spanish, Negro, which are related to the Latin word for “Black.”  Should we stop using those or even the word Nigeria?  It is amazing how much confusion a few ignorant people can envision or conjure up.

Some ignorant people who could not properly pronounce the Latin word used it and their pronunciation became derogatory.  It used to mean that the subjects were Black, but it may connote big noses, nappy hair, thick lips, which are things some Black people want no parts of because they hate “self.”   It may also connote slave, ape-like, ignorance, crazy, retardation, subservience, or a host of other adjectives.  However, who knows what anyone means when they use the word in any given context?

This is an image of what some probably referred to as a Nigger.   I can see why this would be derogatory.  It is not flattering and it is cruel and inhuman. 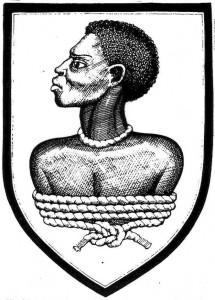 Today, the word has no universal definition.  We do know that if you get into a road rage situation or attend a Klan rally, or if someone is angry with you and they refer to you in those terms regardless of your ethnicity, it means every negative thing they ever envisioned.

If a person approaches you and says, “[I] love you!  You are my Nigga,” that could be a term of endearment.

I would not kill the word….  It has economic value.  I think we should co-op it solely for Black people’s use and commercialize it.  For those who object to the word, maybe we can sell buttons for them that say do not use the “N-Word” in my presence or don’t call me a “Nigger.”

Black people are the only ones who can say it to another Black in a non-derogatory manner anyway.  Let’s face it, we are not going to get rid it.  We can’t bury it.  Some people are always going use it or a variation such as “Nigga.”  Some folks are still not going to say it or feel uncomfortable using it.

Everyone around the world takes negative images and commercially co-ops them so that those who might otherwise use them are not able.   Look at the triangle that the Nazi’s allegedly used to single out homosexuals for example.  Peckerwood is another.   I have seen White people selling peckerwood caps on line.

Many of us may not know or re-call how we hated being referred to as “Black.”    We preferred the word “Negro,” which means the same thing.

So what does the N-Word really mean to you?  Unless I understand the context, I am uncertain what that person means or how or if I should respond.  Unless it triggers a money making venture, perhaps a discrimination lawsuit, I know I will not spend a lot of time pondering over it.

Let’s get paid first, and then let’s worry about what we would like to be called.  I prefer being called “My Pharaoh.”

All I know is when I was a child growing up in a predominantly Black neighborhood, before “Black and Proud” were used together, if someone referred to me as a Nigger, I would look to them, regardless of their race and calmly and say, “[Y]a mama.”

If they meant Black when they used the “N-Word,” because of recent DNA discoveries, I was so right in that modern science has proven that all humans have a Black ancestor.