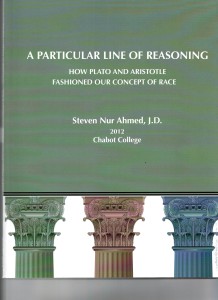 Friedman puts the epic of Noah and the Great Flood in Genesis under both the ‘J’ (Yehweh) and ‘P’ (Priestly) accounts.  The two accounts have two or more different authors and as a result the two stories differ in many respects.[1]  For our purpose it is important to note that in the first story or the ‘J’ (Yahweh) account there is no mention of Noah’s sons by name.  However, in the second account or the ‘P’ (Priestly) account circa 485 B.C.E. there is mention of Noah’s three sons by the names of Ham, Shem, and Japheth.[2]  One can clearly see that the two stories were written by two different authors.  In one story, Noah sends out a ‘black raven’ to determine whether the flood waters had subsided; in the second account, Noah sends out a ‘white dove’ to see if the flood waters had subsided.  Further, in the ‘J’ and ‘E’ account, Noah takes a pair of each species of animal whereas in the ‘P’ account, he takes seven pairs of each species of animal.

There is another problem with the Noah epic; circa 2650 BCE an earlier epic called Gilgamesh had already been written. It, too, had a flood account.  It also has a ‘Plant of Life’ analogous to the Genesis ‘Tree of Life’ in the ‘P’ or Priestly account of the Garden of Eden.  The geographical origin of the epic Gilgamesh is in or around the city of ‘Uruk’ (Erech). Thousands of Jews were captives in Babylon and subsequently, Persia. They were influenced by Babylonian myths and they also restructured their religious hierarchy to conform to the priestly hierarchy in Babylon.[3]  Thus, it is reasonable to infer that probably the writers of the epic Noah plagiarized parts of the epic Gilgamesh.

In the Biblical account of the great flood, Noah is said to have cursed Ham for what ‘Ham had done to him’.[4] According to this myth the Canaanites, Egyptians, and Nubians, et al, are the descendents of Ham; the Greeks and Medes or Aryans are the descendents of Japheth; and the Semitic peoples which include Arabs and Hebrews are the descendents of Shem.  Biblicists, historians, and anthropologists would take these three proper names and divide humanity into three distinct races.  The Hamite, Semite, and Japhetic or Aryan peoples would come to represent the three racial spheres.

There was no attempt to incorporate the Asian peoples into one of the preceding categories. That represented yet another fault line in the theory derived from myth. Those classifications are not used today because modern research uncovered obvious contradictions inherent within that classification scheme. No credible anthropologist would use them because they do not conform to the root language families of Indo-European and Afro-Asiatic. For example, all of the Semitic languages fall under the Afro-Asiatic language group as defined by Greenburg, et al. The Afro-Asiatic language group includes the Egyptian, Nubian, Ethiopian, Hebrew, Arabic, and Aramaic as well as many other African languages.[5]  This would rule out the category ‘Shem’ leaving only the two racial categories of Hamite and Japhetic.

No one knows what Ham supposedly did to Noah. The myth does not say. Noah’s curse only says that the descendants of Ham would be servants (slaves) to the descendants of the other brothers.[6]  There are no other characteristics identified by the curse which would set the descendants of Ham apart from others. However, that would all change by the 7th century A.D. when a nation of eastern European converts to Judaism called ‘Khazars’ would limit the Noah curse to African people or ‘black’ people.

By the 7th century A.D., the Babylonian Talmud expressly identified black skin color, swollen lips, kinky hair, red eyes, and elongated male genitals as ‘signs’ of Noah’s curse.[7]   Later, in the 12th century, Moses Maimonides (circa 1135) would reinforce those characteristics when he wrote the ‘allegory of the King’s Palace’ in his book Guide for the Perplexed. He used the term Hamite and suggested that under some conditions it was proper for Jews to exterminate Muslims and Hamites (Cushites).[8] Even more, we have the first evidence of ‘dehumanizing’ language. No longer are we dealing with just a curse, but with degeneration of one group from humanity based upon their physical characteristics. This type of anthropological categorization was pervasive in the United States from its founding in 1789.  The Mormon leader Joseph Smith took it even further to the extreme when in his doctrine they associate ‘Negroes’ with Satan in a pre-earthly rebellion against God.[9]

For centuries, the Noah myth has reinforced the myth of white supremacy in the western world as well as the Varna caste system in India. It continues today in the form of thousands of stereotypes propagandized through mass media owned by the descendants of the people who originated the myth.

[3] See: Torah, Ezekiel’s dry bone metaphor. It was customary for the Persians to leave the dead in an open pit thus resulting in a dry bones burial site.

[6] Genesis 9:25-27, (NIV): “Cursed be Canaan! The lowest of slaves will he be to his brothers…May Cannaan be the slave of Shem…May God extend the territory of Japheth; may Japheth live in the tents of Shem, and may Canaan be his slave.”

[8] “…I consider these as irrational beings, and not as human beings; they are below mankind, but above monkeys, since they have the form and shape of man, a mental faculty above that of monkey. But those who hold false doctrines within the country (the followers of Muhammad and the supposed descendents of Ham ) recede more as they appear to proceed…under certain circumstances it may be necessary to slay them…” Moses Miamonides

[9] “There is a reason why one man is born black and with other disadvantages, while another is born white with great advantage. …All took sides with Christ or Satan…The Negro, evidently, is receiving the rewards he merits.” Joseph Smith, Doctrines of Salvation, Vol. 1, pages 66-67

Hesiod’s ‘Works and Days’ (750 BCE) presents us with a mythological paradigm.  It is a poem which implies the theory that civilizations undergo a cycle of change (the Ages of Man).  As such it imputes certain assumptions about the origin of human beings, human differences, and their different moral worth.  In this chapter I will not trace its intellectual origin, though many scholars argue that it passes through the mythological figure Orpheus to the Greeks from ancient Egypt.  Plato says as much in his account of the myth in his work the ‘Republic’.[1]

What I will do in this chapter is demonstrate that Hesiod’s theory of civil change was adapted by Plato.  Now, because Plato adapted Hesiod’s theory of civil change and because Greek philosophical influence had spread throughout the Mediterranean world and Asia Minor after Hesiod’s death (750 BCE) Greek mythology had taken firm root.  There is strong evidence to support the claim that Hesiod’s myth had influence on the person who wrote the ‘Book of Daniel’ in the Torah or Old Testament.[2]  All three sources had a direct influence on early medieval and enlightenment assumptions underlying race ideology in the Western world as well on the founders of the United States and eventually on the ideologues and apologists for the institution of slavery.[3]

Hesiod admits his account to be a ‘tale’. This parallels Plato’s dialogue in the ‘Republic’ exactly, for both men admit that their account is a ‘lie’. However, taken together with his description of the ‘farmer’s cycle’ it may be inferred that Hesoid aimed to either affirm or posit that human history is cyclic in nature.  He explains the cycle of change by establishing that differences in ‘genos’ or ‘race hegemony’ is determinative of civil quality and therefore, that the historical hegemony of each ‘genos’ or race corresponds to a different human epoch or ‘Age of Man’.

He first describes the ‘golden genos or race’. In his account they had divine characteristics and lived a life of cultural refinement and ease.  This race of men did not die; rather they became disembodied or transfigured to become guardian spirits.

Next, he describes the ‘silver’ genos’ or race who were qualitatively less noble than the ‘golden’ race: ‘it was like the Golden genos neither in body nor in spirit”[4].  A major indicator of their inferiority was their life span which was significantly less than their predecessors.

Next, there was generated the ‘bronze’ genos or race.  They were mortal and ‘in no way equal to the silver age…’  However, this race was physically far stronger than any other race. They were said to be ‘terrible and strong’.[5]

Next, there was a race of ‘demigods’.  They were nobler than their predecessors because they were ‘hero-men’.  Hesiod states that this race is the race before ‘our own’ race (the Greeks).

Lastly, he describes the ‘Iron’ genos or race.  This race for Hesiod is morally corrupt by nature and is damned.  It never ceases from ‘labor and sorrow by day.’[6]

Except for the demigods, each metal corresponds to a specific moral worth.  Upon close inspection, central to Hesiod’s cycle is a description of social degeneration from the golden to the iron age with one anomalous intervening period ruled by the hero-men or demigods.  We see an analogous description of civil degeneration after Hesiod in the book of Daniel, circa 700 B.C.E, wherein the writer describes the same moral scale of worth for the metals from gold to iron and clay.[7] I claim that both Hesiod’s myth and the dream of Nebuchadnessar by the writher Daniel originate from the same source text or that the writer of Daniel was influenced by Hesiod’s poem.

Later, in the writings of Plato, Johann Blumenbach, Joseph Count de Gobineau, et al we shall see the use of the ‘myth of the metals’ to establish a ‘theory of status quo’ with race mixing as the single determinate in the degeneration of civilization from what for Hesiod is the ‘golden’ genos to Hitler’s ‘Aryan’ or white race to the ‘Iron’ genos or what Gobineau would call the ‘black’ race.  Note well the many other characteristics in Hesiod’s myth of the metals because they will become attributed to specific racial types by color in the time of the enlightenment philosophers, and eugenicists. They will ultimately  influence states’ legislation throughout the United States.

[1]  Plato, the Republic, adapted from The Dialogues of Plato, translated by Benjamin Jowett, William Benton, Publisher, 1952, [403]: “In the succeeding generation rulers will be appointed who have lost the guardian power of testing the metal of your different races, which like Hesiod’s are of gold and silver and brass and iron. And so iron will be mingled with silver, and brass with gold, and hence there will arise dissimilarity and inequality and irregularity, which always and in all places are causes of hatred and war.”  Note the near exact point made in the book of Daniel 2:31 to 2:44.

[2] The Jews were taken into captivity by several Babylonian Kings between 597 BCE to 582 BCE.