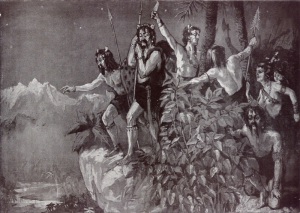 The idea of white supremacy has a long history. Five thousand years ago nomadic tribes of south Europeans out of the Caucus Valley region began to move south and finally into north India which was called Palan. When they arrived they came into confrontation with the great Indus Valley Civilization.

The Aryans were pressured by climate change to move out of their habitat. They moved because the great North African monsoon rains which had lasted for 20,000 years had come to an end.

One of the collateral effects of the end of the North African monsoon cycle was that their ancient homeland could no longer support their growing populations because of severe climate change.

One of the Hindu books was written by a man named Manu. In that book the laws governing racial purity were laid down. The superior race of Aryans were called Golden or those of Golden or ‘blonde color’ by the word ‘Su-varna’.

Varna is a Hindi word which means ‘color’. The language of Hindi belongs to the Indo-European language family. It is a term used in the religion of Hinduism to describe the social and economic model of the Hindu religion. It is the most ancient system of white supremacy. It dates back 4,500 years or to 2,500 years B.C.

One assumption of the Hindu religion is that skin color determines whether a person is good or bad and thus their caste status for life. That assumption derives from a myth which tells how the different castes of India were created.

The Hindu Purusha Sukta of the Rig Veda narrates that the first man named Purusha destroyed himself so that a human society based upon hierarchy could be constructed out of his body parts.

The myth narrates that the high caste called the Brahmans were created from the head of Purush; the K-sha-trias were created from his hands; the Vai-shia were created from his thighs; and the Sudras from his feet. This myth is similar to the Torah myth in the book of Danial when in a dream he saw the various castes of the Kingdom as Gold, Silver, Bronze, and iron mixed with clay. Each denoting a different race caste.

After many years of war the great Indus Valley Civilization was destroyed and its people enslaved. The original people had lived in Palan or India for over 50,000 years. They were descendants of Black African people who migrated out of Africa more than 70,000 years ago.

Enslaved under Hinduism they were called Sutra or outsider. They came to be the untouchables because the qualities associated with them in the Hindu religion were those of stupidity and lack of creativity as well as carriers of disease, and filth.

One thousand years later the idea of White Supremacy would be expressed through the Greek thinkers Plato and Aristotle. Plato sketched a social hierarchy which he divided into four castes. The castes were based on the idea of race; the Golden, the Silver, the Bronze, and the Iron. He warned against the mixing of the races and argued for racial purity. His racially divided society corresponds to the Hindu caste system outlined by Manu in his book: Manu Smriti.

Article 1, Section 2, Clause 3 of the U.S. Constitution defines a class/caste hierarchy by gender and race. It first defines free persons as those who are citizens. As citizens they are the full beneficiaries of the Bill of Rights. But the definition of who could be a citizen was not without its controversy.

But even more specifically only white males could be free because white women could not vote nor if married own property in their name. So, even within the highest caste there was a division by gender giving all political and economic power to white males.

The second group is a caste/class. They were ‘those indentured for a term’. They were contract laborers who sold themselves out to do work for payment for passage from Europe to the newly founded United States.

Once an indentured servant completed their contractual obligation they were free to apply for and be granted citizenship as long as they could prove that they were white.

The third caste identified ‘those not taxed’ were Native Americans. They at that time were recognized as sovereign nations and thus outside the scope of rights and privileges granted by the Bill of Rights.

The last and bottom caste is that of ‘3/5ths all others’. That famous phrase refers to African slaves who were then defined as chattel property. As such African slaves had no constitutional rights, nor human rights which a white man had to recognize. That idea was expressed by Thomas Jefferson.

No doubt Thomas Jefferson was influenced by the Varna ideology when he wrote his only book, Notes on the State of Virginia-Query 14. In that book his description of African people corresponds exactly to that given in the book of Manu and the role of the ‘untouchable’ black people of India.

The hierarchy which I have described from the U.S. Constitution overlaps perfectly with the Varna caste system defined in the Book of Manu which governs Hinduism to this day.

The fact that the color caste system established 4,500 years ago by the Aryan tribes in the Indus Valley and long before the Christian era and over two thousand years before the advent of Islam proves that the ideology of white supremacy is a global movement equivalent in nature to a religion which demands in its dogma the belief in the superiority of the white race and the inferiority of Black people and all other people of ‘color’ wherever they may be found.

Another unavoidable conclusion is that every post-Christian and Arab cultural institution was influenced more or less by the race caste ideology of Hindu White Supremacy. Thus global enslavement and economic exploitation based on skin color emanated from the centers of Europe and the Middle East.

Today, we face the problem that no Black labor is needed in the United States. I mean that in the absolute sense.  Yes, influence peddlers will continue to hustle votes for either the Democratic or the Republican parties. But the fact is that African Americans are in more danger now than they were during the era of chattel slavery.

I will leave you with this quote from a forward by Staughton Lynd in the book: Who Needs the Negro? He wrote: “…if the white American no longer needed the black American’s labor, he might feel free to express his racism fully; not merely to exploit the black Americans, as in the past 300 years, but to kill him.”

I recommend that you research the domestic demographic statistics on African Americans and add to that Labor Department annual reports. You do the math. You draw your own conclusion.